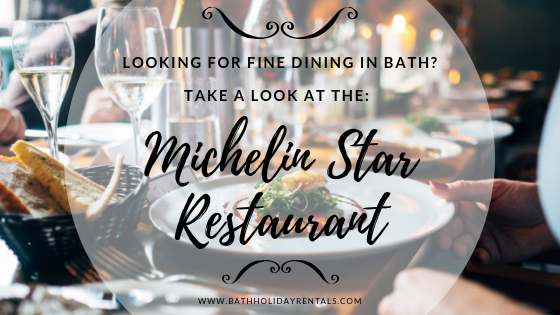 For those special occasions, or for those who simply love their food, Bath has a number of exquisite restaurants to choose from.

Looking for Michelin star restaurants in Bath? Considering the quality on offer in the city, you may be surprised to find that Bath only currently has one Michelin-starred eatery. Read on to find out which one, as well as the best restaurants in Bath with one, two or even three AA rosettes.

The Olive Tree – the only Michelin-starred restaurant in Bath

In the Michelin Guide 2019, it was revealed that the independent restaurant The Olive Tree on Russell Street has been awarded its first Michelin star. This is a fantastic accolade for the restaurant and its head chef Chris Cleghorn, who joined husband and wife owners Laurence and Helen Beere in the restaurant in Queensberry Hotel five years ago. He had previously worked under esteemed celebrity chefs Michael Caines and Heston Blumenthal before donning the head chef’s apron at The Olive Tree.

“It is almost impossible to put into words what it means to me as a chef to be recognised by Michelin with a star for The Olive Tree, and for us to be the only one in the city of Bath.

“This has been an incredible journey, but this reward reflects the years of dedication and hard work that we have all collectively put in to create our own individuality on the UK restaurant scene.”

The Olive Tree has become the only Michelin star restaurant in Bath after Bath Priory lost its star in the 2018 guide.

What to expect from The Olive Tree

This critically acclaimed restaurant, nestled in the basement of the Queensberry Hotel, serves up ‘Five’ and ‘Seven’ tasting menus, with dedicated versions for vegans, vegetarians and those in need of dairy-free choices. This stylish eatery is also known for its wonderful wine selection, cheese and canapes menu and for its focus on sourcing fresh ingredients locally.

Highlights of the dishes on the menu, which combines classical flavours with modern techniques, include white truffle tagliatelle, Fallow deer with Jerusalem artichoke and smoked eel with celeriac –although the seasonal menu does change regularly.

You’ll find the Olive Tree on Russell Street, right next door to our Russel Garden Apartment – so very handy if you’re staying there!

There may only be one Michelin star restaurant in Bath, but this doesn’t mean there aren’t plenty of delicious, exceptional fine dining choices available. For example, all of the following have at least two or even three AA rosettes (along with the Olive Tree, which has three AA rosettes along with a Michelin star), which are a mark of culinary excellence: