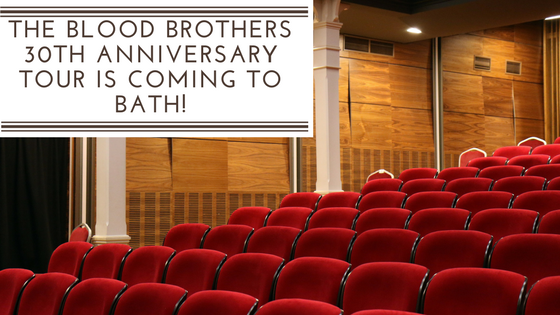 The Bath theatre scene is nationally renowned, thanks in part to beautiful venues such as the Bath Theatre Royal and innovative spaces such as Komedia and The Egg at the Theatre Royal. It also attracts some of the UK’s biggest productions, and one of the most celebrated is now heading to Bath after 30 years of success.

Blood Brothers, the award-winning musical about twins separated at birth, will enjoy a five-day run at the majestic Theatre Royal on Saw Close from 16th-20th January 2018.

This year marks the Blood Brothers 30th anniversary, after the acclaimed musical was staged for the very first time at the Liverpool Playhouse in 1983 and was quickly transferred to the West End. It reopened at the Noel Coward Theatre in London in 1988 before moving to the Phoenix Theatre where it ran all the way until the show finally closed in 2012. Since then, it has enjoyed success in Australia, Broadway in the U.S. (where it won multiple Tony awards) and even South Africa, and is now returning to the UK for a 30th anniversary tour.

Blood Brothers is best known for its iconic songs, including Tell Me It’s Not True, Marilyn Monroe and Bright New Day. However, fans also love its moving storyline, of a desperate mother with a dark secret and twin brothers reunited with fateful consequences.

Written by Willy Russell and staged by Bill Kenwright, Blood Brothers Bath will feature acclaimed actress and singer Lyn Paul in the role of Mrs Johnstone. In addition to fame as a member of the international pop group The New Seekers in the 1970s, Lyn Paul also played Mrs Johnstone on several occasions during the production’s long run in the West End. The rest of the Blood Brothers Bath cast includes Dean Chisnall, Sarah Jane Buckley and Sean Jones.

The production’s latest run in the UK, which takes in Manchester, Belfast, Cardiff and Edinburgh, has already been received with rave reviews by critics. The Sunday Times describes as Blood Brothers “Exhilarating! One of the best musicals ever written.”

Tickets for Blood Brothers Bath are available from the Theatre Royal website and are priced at £26.25 to £45.25.

About the Theatre Royal

The Theatre Royal Bath is one of the city’s most impressive buildings. Constructed in 1805 and now a Grade II listed building, it has been described as one of the most important examples of Georgian theatre architecture. It has a capacity for 900 audience members, but is also home to the Ustinov Studio, the ground-breaking family theatre The Egg and the Vaults restaurant.

You’ll find the Theatre Royal on Saw Close, not far from the Roman Baths. Theatre-goers can also stay close by, as Bath Holiday Rentals’ has two luxurious apartments – Hot Bath and Margaret’s Building – just a short walk away.