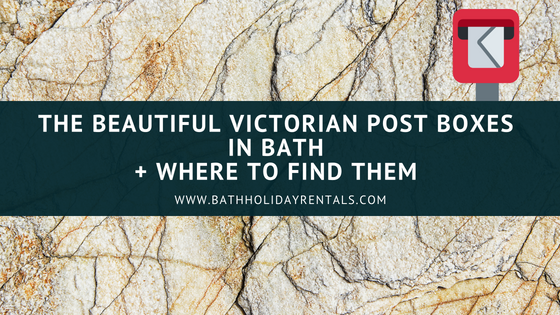 When you think of all the amazing landmarks in Bath that people flock in their thousands each year to see, you’re most likely to picture Bath Abbey or the Roman Baths. But a surprising number of people are heading to the city to seek out an often-overlooked charm of the city – its authentic and unique Victorian post boxes.

If you’re hot on the trail of Victorian post boxes in Bath, there’s only one place to visit – Great Pulteney Street. In this area is where you’ll find two original red hexagonal post boxes found in only a handful of other cities in the UK.

To get to Great Pulteney Street from the city centre, cross the famous Pulteney Bridge – which has featured in a number of film and TV productions including its most famous appearance in Les Misérables. Once you’re across the River Avon, continue onto the grand thoroughfare that is Great Pulteney Street until you see a splash of red where Edward Street branches off from the main street.

If you’re staying at our Georgian Great Pulteney or indulgent Edward Street apartments, you’re very lucky indeed. The most famous post box in Bath is just around the corner, so you’ll be able to say hello to it every time you go in and out of your home-from-home.

This is the most famous of the two Victorian post boxes in Bath. The second is close by, but a little trickier to find. It’s more tucked away on Laura Place, close to the Laura Fountain. To find this one, trace your steps back down Great Pulteney Street until you reach the fountain – then explore the edges of the square until you find it.

As you’ll see when you visit them in person, these two post boxes are very different to the designs we have on UK streets today. The design is known as the ‘Penfold hexagonal’ which was the standard for post or pillar boxes between 1866 and 1879.

Interestingly, the reason we don’t still use the Penfold hexagonal in modern times is due to its shape. While you may admire the impressive Victorian design, postal workers were finding that it was somewhat impractical as letters were getting stuck in the corners.

Another fantastic place to visit if you’re interested in Bath’s postal history, including its fame as the city where the first stamped letter was posted back in 1840, is Bath Postal Museum. You’ll find this fascinating gem on Northgate Street, where you’ll find rare letters, old post boxes and a number of changing exhibitions.

You may even be able to enquire about one of Bath’s ‘lost’ post boxes, a wall-mounted Victorian post box formerly of Camden Street but which was removed during renovations. Entry to the museum is just £4.50 per adult, £1.50 for children over 6 – it’s free entry for children under 6 years old.