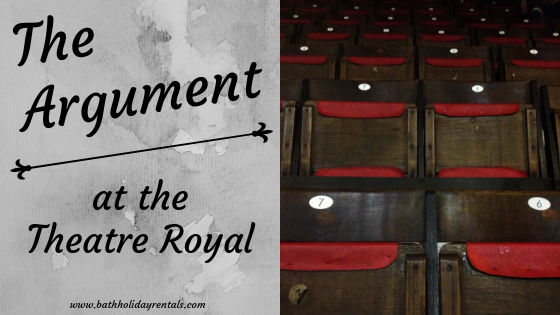 Bath is a great place to enjoy incredible theatre. The city boasts a number of magnificent and innovative venues, putting on a packed year-round programme of drama, comedy and children’s entertainment.

The latest big attraction to land at the Theatre Royal Bath on Saw Close is The Argument, the darkly funny play by best-selling novelist William Boyd. The Scottish author and screenwriter is internationally famous for a number of works, including the award-winning A Good Man in Africa.   The play opens in August, to the great anticipation of local theatre fans.

The production will star national treasure Felicity Kendal, best known for her TV work – including The Good Life, which shot her to stardom – but the actor has also won critical acclaim for her many appearances on stage.

The Argument is directed by Christopher Luscombe, who is known for directing The Nightingales and Nell Gwynn, which won the 2016 Olivier Award for Best New Comedy.

A marriage at breaking point

The play centres on married couple Pip and Meredith, whose evening out at the cinema turns into ‘The Argument’. Grievances are aired and the argument escalates, leaving the couple at war and fearing their marriage is heading for the rocks.

Enter the couple’s well-meaning but ultimately troublesome friends, as well as interference from their respective parents, and everyone is drawn into ‘The Argument’. This engaging play is funny, dark and brutally honest, leading you into a fascinating and hilarious exploration of the complexities of human relationships.

About the Royal Theatre

The Theatre Royal Bath is one of the oldest and most beautiful theatres in the country. The Grade II listed building was built all the way back in 1805, and is now one of the most important surviving examples of Georgian theatre architecture. Visitors are awestruck by the grand auditorium, red and gilt decoration, glittering chandeliers, galleries and magnificent trompe l’oeil (the optical illusion of three dimensions) ceiling.

The Theatre Royal Bath actually boasts three individual theatre spaces, the Main House (where The Argument will be performed), the Ustinov Studio and The Egg theatre for children and family entertainment. The Theatre Royal’s ‘What’s On’ programme is always packed with shows, interactive events and more for all ages. If you’re coming to Bath, a trip to the theatre is a must.

There’s still time to buy your tickets for The Argument, as dates run from Wednesday 7th August to Saturday 24th August 2019. There are performances Monday to Saturday at 7.30pm, with matinees Thursdays and Saturdays. The box office is now open, with tickets starting from £27.

If you’re making a special trip to Bath to see the play, make sure you book your accommodation in advance. Our Queen’s View and Hot Bath apartments are just a stone’s throw away from the Theatre Royal Bath, the perfect place to stay ahead of the performance. You can also take a look here at other conveniently located Bath Holiday Rentals city centre properties.