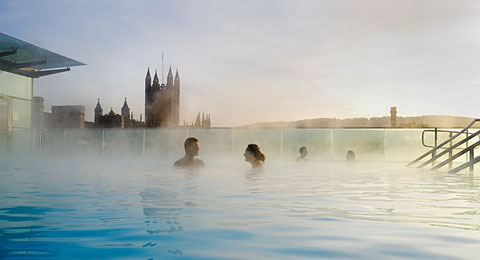 The ancient Roman Baths, in the very heart of the city, is one of Bath’s best and most popular tourist attractions. If you think you know everything there is to know about this historic landmark though, prepare to be surprised.

An exciting new project is soon to be launched which will open up a series of hidden spaces that the public never usually gets to see. The Archway Centre Project aims to restore and open a network of tunnels and spaces underneath the baths on Stall Street and nearby York Street and Swallow Street. These chambers and tunnels were rediscovered by the Victorians, but have been out of bounds to the public for decades.

The project, which has received a £3.4 million grant from the National Lottery and is working on more fundraising, is expected to increase the size of the public part of the Roman Baths by 10% once complete.

Exploring the laconium and other hidden spaces

One of the most thrilling of the new spaces is the laconium, a dry sweating room in which heat radiates from stone walls and seats. This and other spaces are fascinating due to their humidity, although this is proving a challenge for the restoration team. Visitors to the Roman Baths will also be able to explore a typical Roman exercise yard, where people would typically play a type of juggling game called Trigon.

“It will extend people’s understanding of the whole Roman Baths – it was not just about bathing.

“The atmosphere of this space is slightly different to the baths.

“We didn’t want to create a sterile environment but rather one where people feel they are discovering it for the first time.”

The project will also include a brand new Clore Learning Centre, featuring an investigation zone set among Roman remains and offering all of the information visitors will need to glimpse what these ancillary parts of the complex were used for in Roman times.

When can you visit?

Unfortunately, you’ll have to wait until the work is completed to explore these unique and ancient parts of the Baths. The team will be starting building work in 2018 and hope to complete the project in 2019.

The Roman Baths will remain open in the meantime though, so there’s plenty of chances to visit its many attractions below street level – including the Roman Temple, the Roman Bath House, the Sacred Spring and the many amazing ancient artefacts contained within the complex.

Bath Holiday Rentals has many elegant, perfectly located properties within a short walk of the Roman Baths, including the bijoux No. 10 nestled inside a handsome Georgian building in the heart of the bustling city centre. Even better, why not stay at Hot Bath overlooking the Thermae Bath Spa?

The Roman Baths doesn’t actually allow bathing, but there’s nothing to stop you soaking your cares away at one of the best hot spa centres in the country.