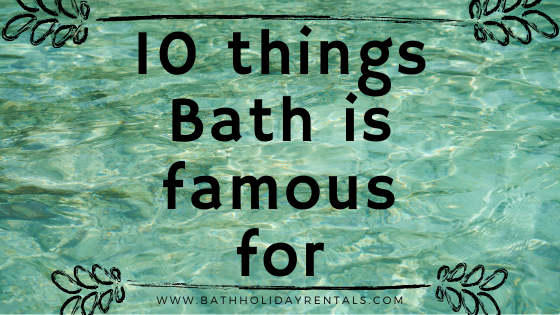 Think you know Bath? The city is famous for a great many things, but it isn’t all Georgian architecture and Jane Austen. Here are 10 things about Bath you really need to know…

The astronomer William Herschel was in his back garden on New King Street on 13th March 1781, when he discovered the planet Uranus. Using a telescope he’d built himself, Herschel realised that a particular ‘star’ was orbiting the sun. He also discovered two of Uranus’ moons – Oberon and Titania. You can find out more about the famous astronomer at Bath’s Herschel Museum of Astronomy.

In 1987, Bath became the only city in the UK to win UNESCO World Heritage status. This was because of its cultural and architectural treasures, such as 18th century buildings, hot springs and Roman remains.

A new, free-to-access World Heritage Centre is now being planned for the heart of the city, where you can find out more about the exceptional historic sites in Bath.

On 6th May 1940, the first pre-payment postage stamp came into use in England – known as the Penny Black. A few days before it was officially introduced, the postmaster of Bath, Thomas Moore Musgrave, posted the first ever letter sent with a Penny Black.

Geothermal energy, pressure and a geological fault causes rainwater from the Mendip Hills to rise to the surface in Bath at a temperature of 46 °C. Three of Bath’s hot springs feed the Thermae Bath Spa, making it the only place in the UK you can bathe in natural hot spring water.

The city became a spa in 60 AD, when the Romans built a temple and baths on the site of the hot springs. They named the city after the Latin for ‘the waters of Sul’ – Aquae Sulis.

The Royal Crescent and The Circus are renowned Bath landmarks, but there are actually seven of the magnificent sweeping structures dotted around the city. Others include Camden Crescent and Lansdown Crescent.

Jane Austen is one of Bath’s most famous residents, and she was so inspired by the city that she based parts of Persuasion and Northanger Abbey in Bath.

Dickens was said to be a frequent visitor to the city, starting from 1835 when he was a young reporter. He’s even said to have stayed at The Saracen’s Head on Broad Street, which dates back to 1713.

Bath has been the backdrop for a number of hit feature films, including Les Misérables, The Duchess (starring Keira Knightley), Persuasion and Vanity Fair. Its most famous appearance is arguably in Les Misérables, where *spoiler alert* – Russell Crowe’s Javert plunges from Pulteney Bridge, one of Bath’s most famous landmarks.

Building work on the current Bath Abbey as we know it started in 1499, finally being completed around 120 years later. But there has been a place of Christian worship on the very same site for more than 1,200 years.

Find out more about Bath here, and keep an eye on our blog for weekly updates on the latest goings-on in the city.